The world isn’t divided into 24 equal time zones, making it a little more difficult for remote workers to keep track of their team members’ schedules. Because of time differences, even the best worker might schedule a meeting and get it wrong. So is there anything we can do to make working in multiple time zones easier?

When we work with people from across the globe, we often have to work at unusual times. With global teams, there’s often not a choice. We have to work odd hours if we want to interact with our colleagues on the other side of the world. And we simply can’t squeeze the world and bring time closer together.

Tips for working with time zones 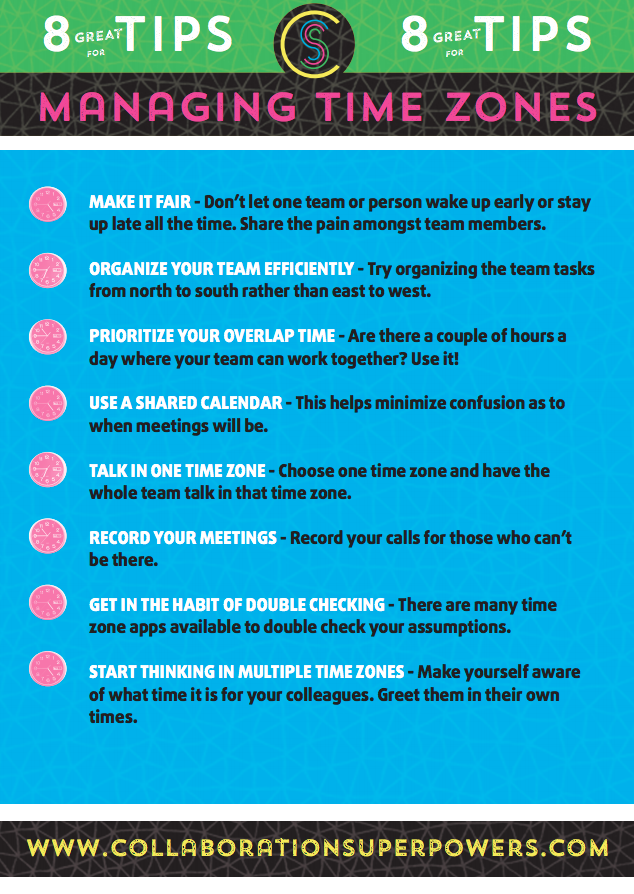 Interviews packed with stories and tips for those whose business models depend upon successfully bridging distance! 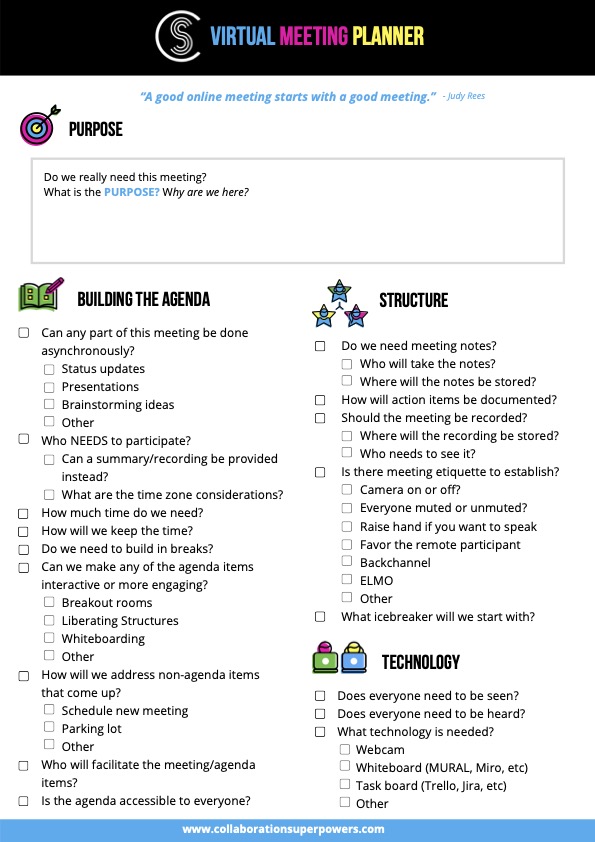 Check out some of our all-time favorite resources for hybrid collaboration.

Welcome to the Collaboration Superpowers podcast. My name is Lisette and I’m interviewing people and companies doing great things remotely. Welcome to episode number 116, everybody. Thanks for being here. One of the most frequent questions that I get about working with global teams is how do we deal with time zones. They’re always so painful. We’re always getting things wrong. Somebody staying up late or getting up early. Is there anything that we can do to make time zones easier? The bad news is we can’t shrink the world and make there be less time difference. It’s just not physically possible. So that part can’t change. But the good news is there are lots of tips that you can try to make dealing with global teams easier for you. I’d like to start though by thanking [Christian Kango – 00:59] from Nordea who was the inspiration for me finally making a podcast episode about this. We were talking about how to make online meetings less painful. And time zones came up and he said, “You really should do a podcast about that.” And I thought, “Oh, of course, of course, I should totally do a podcast.” So this week, we’re going to talk about time zones. Now the first tip that I have is if you’re working with people who are really far apart from each other, say Vietnam verus San Francisco, then one thing that really must be done is make it fair. Inevitably, when you want to have meetings, somebody is going to be staying up late or getting up early or calling in during a time that’s kind of painful or inconvenient for them. And the best tip that I have is make it fair. Everyone should feel and share the pain of time zones when you’re working on a team. So don’t just have it be one team all the time.

The next tip I got from Johanna Rothman back in episode number 87, and that is organize your team well. And what I mean by that is instead of going from east to west, try organizing your teams from north to south instead. So even though there’s a great distance between each other, the time zones are actually very close by.

And a lot of people will try to have teams that really overlap a lot, even though they are in other time zones. But it might be something to consider too. Actually, don’t overlap the teams. Keep them very separate. Have them working on separate things with just a small amount of overlap when the times are convenient. There are a lot of different scenarios that we could play out here, but the thing to keep in mind is try organizing your team so that it’s less painful.

My third tip is prioritize your overlap time. So usually, on most teams, there are going to be one or two hours of overlap that you can have and really prioritize that time together. That’s when the meeting should be scheduled. And one suggestion that I’ll make is in that overlap time, try to spend time on video together. That really helps with the bonding, a surprising amount. Most people don’t realize how much that can really help.

My fourth tip comes from the creating a team agreement process that I take people through. If you want to learn more about team agreements, then go back to episode number 42. I talk about it in-depth there. One of the items in the team agreement is to always talk in one time zone. So pick one time zone and then just have the entire team talk in that time zone. And everybody is responsible for converting themselves. But that helps minimize confusion.

Another thing that can help is having a shared calendar. So when you do have meetings or things that the team needs to know about, that everybody inputs that time into a shared calendar, then the time zone conversions are automatically done. And that just helps minimize some of the mistakes that we can make when we’re scheduling time.

Now speaking of meetings, if we work with global teams, not everybody can make every single meeting. So try recording your meetings. And I know this sounds really horrible. We’ve talked about this in other episodes before. But actually, recording your meetings for the people that can be there can be very useful in a number of ways. One is they actually get to see and hear the conversation themselves. And for the person that’s listening, you feel like you’re part of the team, even though you weren’t at the meeting. It has a weird effect when you were seeing your colleagues and you’re listening to them as you’re watching the meeting. It actually feels like you’re there.

Now if you just can’t get together at the same time on a regular basis – say for standup meetings, for example – then start looking at some of the tools. Now one of them that I just discovered in last week’s podcast, number 115, is a Slack integration that a company named [Soft Fetch IO Built – 04:56] called Standup Bot. And that’s something where it automatically asks the questions that you would normally ask in a standup meeting in the Slack channel so that you don’t actually have to get together. [inaudible – 05:07] asynchronous.

Okay, my next tip is to get in the habit of double-checking your times. If you’re going to work with global teams, it just happens even to the best of us. Even I get time zones wrong. Even though I double-check and I’m constantly aware of it and I’m supposedly a pro, even I get time zones wrong every once in a while. So it does happen. But get in the habit of double-checking. And there are some great apps for this. And I want to give you three of my favorites. The first one is the timezoneconverter.com. That’s a very simple time zone check that you can do with yourself in just one other time. The next one is worldtimebuddy.com, and that is for scheduling meetings with people in different time zones.

And then the last one is just the classic worldtimezone.com. And that gives a visual overview of all the time zones in the world at the same time. So that can be really helpful.

Now this leads me into my next tip, which is really start thinking in multiple time zones. If you’re working with a global team, it’s good to heighten your awareness of what time it is for people in different parts of the world that you’re working with. For instance, I work with Gretchen every single day and I start the work with her at 6 p.m. my time, which is 9 a.m. her time. We’re in very different places at those times. I’m eating dinner and getting ready to wind my day down. And she’s just getting started. These are the kinds of things that it’s just good to keep in mind with your teammates.

Now if you want to make yourself aware, of one of the tips that I recommend for doing that is visualize time zones. And there is a great app that one of the buffer developers developed called timezone.io. And that actually visually shows on one screen where all of your teammates are in the world and their time zone, very, very good-looking tool.

And then another one that I got from the buffer blog, actually, was an app called everytimezone.com. And that shows, again, where people are on more of a graph scale. Hard to describe but definitely go take a look.

Now my 10th and last tip for today is even when we’re working with global teams, don’t forget to meet face-to-face every once in a while. Time zones can really keep us apart and it can keep us from connecting with each other as much as we need to or want to. So every once in a while, whenever possible, get the team together face-to-face and rebuild that human connection that we can easily lose when we go remote.

All right, everybody. That’s been today’s 10 tips for dealing with time zone. Just to summarize very quickly, tip number one, make it fair. Tip number two, organize yourself well. Tip number three, prioritize your overlap time. Number four, talk in one time zone. Number five, use a shared calendar to double-check. Number six, record your meetings for the people that can be there. Number seven, try asynchronous tools like Standup Bot. number eight, get in the habit of double-checking. Number nine, start thinking in multiple time zones. And number ten, meet face-to-face every once in a while.

I hope this has been helpful. I hope this helps bring your teams closer together. And if you want to learn more about how you can work from anywhere, visit collaborationsuperpowers.com, a website full of tips and best practices for the practical remote worker.

A big thank you to Nick, the podcast monster, the producer of this podcast and the reason it sounds so pro. You can hire Nick to make you a star at podcastmonster.com. And another big thanks to Alfred Boland, the dazzling designer for Collaboration Superpowers. You can hire him to make you look cool at bolanden.nl. All right, everybody, until next week, let’s squeeze the world a little closer together, shall we? And be powerful.

We use cookies to provide you with the best experience. If you continue to use this site, we will assume that you are happy with it.
ACCEPTPRIVACY POLICY
Manage consent