48 – Telepresence! Why I Welcome Our Robot Potential

In this episode, I share my enthusiasm for the potentials of telepresence. We discuss the applications of using both the KUBI from Revolve Robotics and the BEAM Smart Presence System from Suitable Technologies.

Subscribe to the Collaboration Superpowers Podcast on iTunes, Stitcher or Spotify. 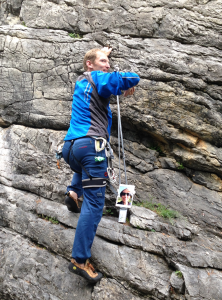 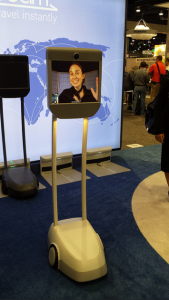 Welcome to the Collaboration Superpowers podcast. My name is Lisette and I’m interviewing people and companies doing great things remotely. Welcome to another episode, everyone. I’m glad you’re here. This week I wanted to do a short episode about telepresence because I seem to be the most excited person I know about it and I’m wondering why others are not as excited as I am. So I wanted to talk today about telepresence, about what it is, and why I for one welcome our robot potential.

So let’s take a step back and start with what telepresence is exactly because most of us use it in our daily lives. We just don’t call it telepresence. For example, a video chat on FaceTime or on any other video conferencing tool that is technically considered telepresence. Basically, telepresence is the combination of technologies that lets you feel like you’re present in another location than where you actually are like I said, video conferencing technology. But when we take it a little step further, we start to see some very creative and exciting things. And I’ll focus on two products in particular because they are the ones I come across most often and know the best, which are the Kubi, the portable video conferencing device, and the Beam Smart Presence system. Now the beam is a drivable robot that you can drive using the arrow keys on your keyboard from your computer. The Kubi gives the person who is beaming in the ability to move their video screen so that they’re able to actually look around the room and see who’s talking. And this is especially awesome for meetings where most people there are in person and there are one or more people who are remote. So each remote participant would have their own Kubi, and they would be sitting at the table along with everybody else. And they could move their bodies and look at other people along with everybody else. Also, not only does it give the benefit for the person who is actually teleporting, but also for the people who are in the room, they see that person looking around, and it makes them seem like more of a person. They actually have a real presence to them, and that’s an aspect that I think is quite underestimated in terms of how important that is and how humanizing that is.

So then how is telepresence being used? And I think this is actually what makes telepresence so exciting. Let’s take, for example, the way that I discovered it, which was through conferences. I saw some friends organizing a conference in San Francisco, and I saw that they were using the Beam to allow a remote participant to beam in and talk with people and attend the talks. And I thought, “Oh, my gosh, this is so cool.”

I mean even Edward Snowden was able to give a talk at TEDx and have a physical presence there and after the talk be able to interact with the other conference attendees as if you were there. I mean very powerful technology, right?

Another way that it’s getting used is in museums. If people want to go to a museum in Leone, for example, but they’re not able to make it in Leone, you could actually be men and look around. The medical field is another place where telepresence is being used a lot, both the Kubi and the Beam smart presence system. And you can imagine if you need a specialist and you live way out somewhere and it’s just not easy to arrange the times that a telepresence system where the doctor would be able to see you and to interact with you and to have you show them things would be a really useful thing to have. And there are of course many, many, many other applications in terms like specialists who want to talk to other specialists really in the moment. I mean you can see the potential, right?

And let’s not forget schools. I recently listened to a podcast, and I can’t remember which one it was. Otherwise, I would plug it. But it was about a boy who wasn’t able to go out in public because of some sort of allergy that he had. So he wasn’t able to attend public school. But once he had the robot, he was able to attend. And he was a very extroverted person and just loved being around people. So for him, this was an incredible solution that allowed him to be part of the school atmosphere while being unable to go there. He even went to Prom. So it’s a really good story. If I remember which one it is, I’ll add it to the show notes.

And one more thing that I’ll mention that was fun to use it [inaudible – 04:32], about a year ago, I saw that NASA was giving tours of their office using one of these double robotics robot, which is also a drivable robot. So immediately, I signed up, and I got to tour the office of the Solar System Exploration Research Virtual Institute. And it was really fun. I just went from office to office and met the people there and interacted with people. And I even had my first virtual water cooler conversation. My robot was literally standing next to a water cooler as I was talking to somebody and I didn’t know it. And as I turned the robot around, I saw the water cooler and thought, “Cool.” As you can see, there are some really fun aspects of the robots. It opens up a whole, new form of office humor. And it’s just a really interesting technology to keep an eye on. And what I find even more exciting is that we’re just in the beginning phases, right? So it can only get better from here. It’s just going to be better representations, and who knows where this is going to lead? I’m thinking holograms or something. If you want to try one of these robots out, then you can take my Work From Anywhere workshop. And we definitely get to do that, some hands-on experience. Plus you’ll learn a whole lot more. And if you want to attend one of my workshops where I am doing it via robot, then you can find me in the Kubi in Beirut at the Agile Beirut conference. And you can find me in Palo Alto in the Beam in August. And details of that will be coming out on the Collaboration Superpowers newsletter, so be sure to sign up for that or keep listening to the podcast.

If you look in the show notes, I’ll have pictures of them both there so that you can check them out and how they work. And I’ve also done interviews with both companies, so make sure to go back and look up the interview with Revolve Robotics, the makers of the Kubi and with Erin Rapacki of suitable technologies, makers of the Beam smart presence system.

I hope [inaudible – 06:20] a little bit to the potential of telepresence and that I have sparked a little bit of enthusiasm to learn more. Please get in touch with me or the companies and be sure to tell them I sent you and will go from there.

All right, everybody, until next time, be powerful.