IdeaBoxes: A Management System For Innovation With Magnus Karlsson 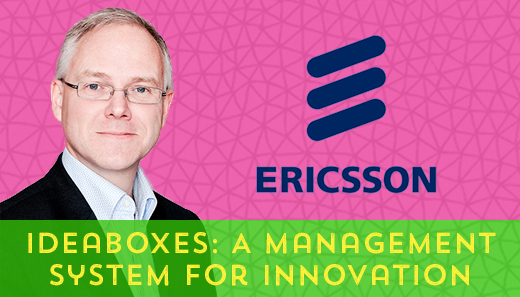 MAGNUS KARLSSON is the director of new business development & innovation at Ericsson, a company that employs over 110,000 people worldwide and does business in more than 180 countries. His team developed a way for all employees to contribute ideas for improvement and innovation. Magnus says, “We wanted to encourage multiple disciplines to collaborate. We also wanted the ability for employees and contractors to be able to look at the same idea at the same time. Gradually, people started to see that keeping ideas to themselves is an old way of thinking. Secret ideas don’t go anywhere.” (http://www.ericsson.com)

In March 2015, I had the honor of interviewing Magnus Karlsson, Director of New Business Development & Innovation. We talked about a global idea management system they developed called IdeaBoxes. This is a summary of our conversation. The interview was organized by Fredrik Wiik from Knowit who works closely with Magnus Karlsson and has had a key role in the latest development phase of the tool.

What is “innovation management”?

Great ideas don’t come from people sitting together and thinking alike. Great ideas come from fragments flowing across people with different disciplines and backgrounds. One of the challenges of a large organization is how to best innovate on a global scale. At Ericsson, we wanted to find a way to allow all employees to contribute ideas for improvements and innovations. And it was from this desire that IdeaBoxes was developed.

IdeaBoxes was started in 2008 as a way to gather, evaluate, develop, and implement the ideas of employees as well as external stakeholders. We developed the tool ourselves, because when we started, the market wasn’t well developed and we hadn’t found any tool that did what we wanted. The design principles of IdeaBoxes are based on openness and collaboration. We wanted a pull system that was extremely flat with no center or hierarchy. We wanted to encourage multiple disciplines to collaborate. We also wanted the ability for different people (internal and external) to be able to look at the same idea at the same time.

Before IdeaBoxes was developed, teams would mostly share ideas with their direct colleagues and managers. Exposure to the global business network was limited. Each business unit had their own tools and ways of doing things. In this model, one person collects the ideas, and from there, the ideas need to be pushed to someone else. You end up with a lot of small islands of ideas without cross-fertilization or visibility as to what’s happening throughout the larger organization. It’s costly and it’s not a smart solution. The challenge was to figure out how to address the complexity of self-organization.

IdeaBoxes is browser-based software, not unlike a social network, where users can follow and submit ideas, as well as search and find others who might share the same interests. And thanks to widespread usage of social tools, people are already used to contributing to this kind of system.

When someone submits an idea, the idea gets categorized into a “Box” and tagged so that information stays in context and is easily findable. Ideas can be flagged by the user as being interesting; the system will help users find like-minded people to continue the conversation. In this way, each idea has the opportunity to create a global micro-community.

When we built the tool, our goal was to make it so good that we wouldn’t have to force people to use it. We wanted the tool to be useful enough for people to give up their local tools and use the global one instead. We started with two units and then tried to spread the word.

There was some initial push back from the older generation whose thinking was more like “My idea is secret so I will keep it in a drawer until the right moment. If I tell the idea, someone might steal it. Or, I might get laughed at.”

This is completely different from the younger generation that, thanks to social tools, says, “Where can I put my idea so that everybody can see it? I welcome the feedback.”

Gradually, people started to see that keeping stuff to themselves is an old way of thinking. Secret ideas don’t go anywhere.

“An idea, like a ghost, must be spoken to a little before it will explain itself.” Charles Dickens

Every business unit had the choice to use their own tools. But over time, more and more people were willing to try IdeaBoxes. There are currently over 60,000 ideas in the system. People all over the world see IdeaBoxes as a way to become visible in the larger organization even if they are on the periphery of where the action typically happens. It’s a way to get recognized and to have the opportunity to do something that matters for the company that is beyond the job description. People want to make an impact with their ideas. This is one way of doing that. And it turns out that those are strong enough motivators to keep it going.

A lot of things have to come together for a successful innovation management system: process components, incentives, and leadership buy-in. You have to think through what to do with all the ideas. Gathering ideas is only one part of that process and the IT tool just becomes a part of that system. If you want to be more innovative, you have to think about what systematic approach can be put in place to funnel things from raw idea to market to value creation.

Obviously, not every idea can be implemented. The questions become how to select the good ones and create value from that? Ideas need to be taken care of. And that’s as much of an IT journey as it is a cultural journey. You have to create a culture that allows for this kind of tool to flourish.

In the future, it will be the organizations that don’t have these kinds of tools in place that will seem like the odd organizations.

Magnus Karlsson is Director New Business Development & Innovation at Ericsson Head­quarters in Stockholm, Sweden. He joined Ericsson in 1998 and has been working in the areas of external research relations, strategic foresight and innovation management. Recently, he was driving the Group-wide scenario planning project Communicating Worlds 2020.

He has two basic academic degrees in Applied Physics and International Relations as well as a Ph.D. degree in Technology and Social Change from Linköping University, Sweden.